The tardy FAA inspection plus the required 40 hour fly-off eliminated Sun-n-Fun from my plans this year.  As it turns out, it wouldn't have happened anyway.
In spite of our best efforts, the long (four year) storage of my engine took its toll with the resulting in scuffed piston!

A little tapping noise was present following the first flight. We were hoping that it was a sticky lifter but over the next few hours it got a little worse so we pulled the valve cover and determined that the lifter was functioning properly.  We  then removed and cut open the oil filter and found some aluminum. Next we pulled the #4 cylinder and found that the piston was significantly scuffed.  The engine was then completely torn down. No other damage was found, no corrosion or indication of abnormal wear.

The engine is now being reassembled with all new pistons,rings, bearings, expendable bolts, etc. Hopefully, we will have it reassembled by the end of next week and back on the airplane before the end of May.

It was a real disappointment to have to ground #88 so soon as I was just starting to feel at home in the cockpit.  I am really looking forward to getting it back in the air. I will have some more reports and videos when we get over this hurdle. 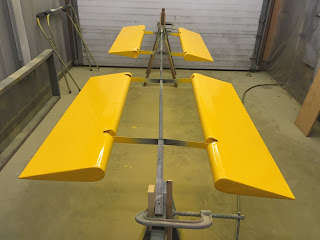 At least I did make use of this down time to get the ailerons painted!
Posted by John R. at 10:26 PM